Back to Blog
Toluna Updates

China’s Mobile Gamers and Money Spenders – Who Are They?

Mobile games now account for more than half of the gaming industry’s global revenue, surpassing console and PC games combined. Shares are expected to increase as 5G-powered cloud gaming expands the possibilities for new gaming experiences, adding another layer to the gaming market.

Asia-Pacific is a major contributor to the growth of the global mobile gaming industry. China accounts for approximately 600 million gamers and is home to mobile game publishers like Tencent Holdings, NetEase, FunPlus, Lilith Games, 37Games, and more. The Chinese mobile gaming market is now valued at an estimated US$63 billion, the second-largest market after the United States,​ and is forecasted for continued growth.

As income increases, consumer spending trends show an increase in entertainment purchases, including games. While “free-to-play” games containing ads or in-app purchases are the standard monetization model for most mobile game developers in China, “pay-to-play” games are steadily growing.

To understand who mobile gamers are in China, KuRunData surveyed 1017 mobile game players.

So, who plays mobile games, how old are they, and where do they live? 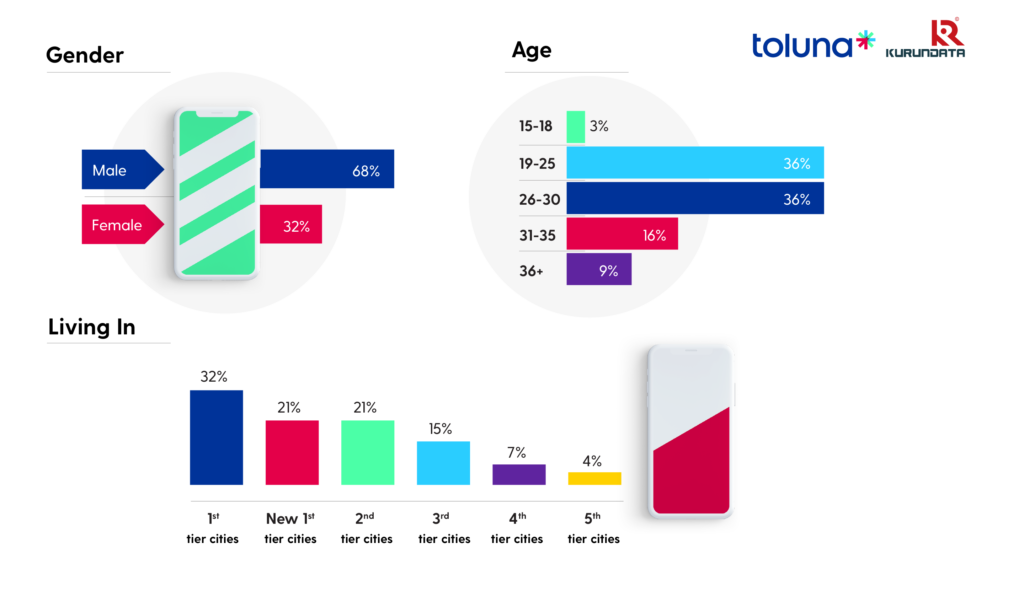 How often do they play mobile games and how much time do they spend playing?

What games do they play on mobile? Do they pay for the games, purchase in-game credits, etc.? The core segment for mobile gamers is 19-30 years old (72.4%) and live in first and second-tier cities. Most at various, unscheduled hours, whenever time allows, with 57% of players spending less than 3 hours a day on games.

Although the number of mobile game titles is constantly increasing, multiplayer online battle arena (MOBA), card games, and gunfight games continue to remain the most popular among players.

Most mobile gamers (70.2%) do not mind spending money on games to enhance their experience, purchasing practical items, characters, character skins, in-game credits, and more; most willing to pay up to 500 yuan per month. A large segment of mobile gamers (32.1%), spend more than 500 yuan on games monthly. MOBA games top the list for game titles that players are most willing to spend money on (36%).

Over the next decade, mobile gamers are expected to spend more money through a monthly subscription model, already adopted by several game publishers. While casual gamers, the largest segment (66.9%), may or may not convert into title holders, they are expected to contribute significantly to the rapid growth of the mobile gaming market.

Toluna is the parent company of KuRunData, a leading provider of real-time consumer insights in China.

All eyes are on the APAC market, we will share insights we’ve gathered from Chinese consumers monthly.